Outlook: Russia’s invasion of Ukraine—and the Western response to it—will exacerbate the supply-demand imbalance that lies at the heart of the global inflation surge. Reducing trade with a current account surplus country via sanctions and boycotts means that the rest of the world needs to produce a larger share of what it consumes. The potential shift is fairly small at an aggregate level, as Russia accounts for less than 2% of global goods trade and GDP. It is considerably larger in oil, where Russia supplies 11% of global consumption. And it is huge in natural gas, where Russia supplies 17% of global consumption and as much as 40% of Western European consumption as of 2021. Unfortunately, the oil price increase is hitting a US economy that is already overheating. We remain pro-risk and believe that buying high quality, profitable, blue-chip equities with strong balance sheets, positive cashflow yield and high dividends will most likely result in double digit return in the next 12 months.

North America
US equities closed largely higher thanks to a stronger-than-expected jobs report. The strong employment data brought fresh concerns that Fed action may not yet have been effective in tapering economic growth, leaving the door open for further Fed intervention. The S&P 500 and Nasdaq composite rose by 0.36%, 2.15%, while the Dow Jones dipped 0.14%. The labour department showed that employers added 528,000 nonfarm jobs in July. This figure came in more than double the consensus estimates of 250,000. Total nonfarm employment in the U.S. has now reached pre-pandemic levels at 3.5%. Despite this, jobless claims edged up in-line with projections to 260,000. Meanwhile, US-China relations met new lows across the week, as House Speaker Nancy Pelosi opted to visit Taiwan (This marks the first for a US House speaker in 25 year), deepening a rupture between the world’s two most powerful countries. Pelosi said her visit to Taiwan was not intended to change the status quo for the island but to maintain peace in the Taiwan Strait, which separates Taiwan and mainland China. President Biden said that the US military opposed Pelosi visiting Taiwan, however, the White House has said it is up to the House speaker where she travels. On Thursday, China fired multiple missiles into waters surrounding Taiwan and began a series of huge military drills around the island. On Friday, China said it was ending cooperation with the US on key issues including the climate crisis, anti-drug efforts and military talks. Last week, the U.S. Congress passed the CHIPS and Science Act, which aims to bolster up the U.S. semiconductor industry and contains restrictions on chip firms considering expanding in China.

Europe & UK
European markets closed mixed as investors reacted to comments from ECB officials that suggested that rate-hiking cycles could be more aggressive than previously expected. The pan-European STOXX 600 dipped 0.59% while the local French CAC 40, German DAX & British FTSE 100 rose by 0.37%, 0.67% and 0.22% respectively. Off the back of rate hikes in July, the Eurozone recorded a rise in unemployment for the first time in over a year. Inflationary pressures consisted, with consumer price growth in the Eurozone accelerating to 8.9% in July from 8.6% in June (above expectations for 8.6% and well clear of the ECB’s 2% target). The jobless rate remained unchanged at a record low of 6.6%, but the number of job seekers increased by 25,000 to just under 11 million. Meanwhile, eurozone manufacturing contracted last month, with final data signaling the sharpest decline in production since the initial wave of COVID-19 lockdowns in spring 2020. This trend was seen in Europe’s largest individual economy, Germany, where manufacturing activity dropped in July, marking the first time in over 2 years. Manufacturing orders fell, (thanks in part due to a large decline in new orders outside the eurozone – despite the recent Euro weakness). New orders declined as the nation noted rising input prices (gas, electricity). German consumers appeared to be affected by the same constraints, with German retail sales having dropped 8.8% year-over-year in June. Meanwhile in the UK, the Bank of England (BoE) opted to raise interest rates by 0.50%, the largest increase in over 27 years, bringing rates to 1.75%. The rate hikes came as central bankers spoke of persistent inflation, projecting figures of 13.3% by October. Inflation is expected to remain elevated through 2023 before returning towards the BoE’s 2% target in 2024/25. More worrying, BoE forecasts suggest that a recession lasting approx. 5 quarters would begin this winter.

Japan
Japanese indices rose as an earnings season’s rally was upended by increased US-China tensions. The Nikkei 225 & TOPIX declined by 1.35% & 0.35% respectively. New reports show that the world’s third-largest economy likely grew at an annualized rate of 2.5% in Q2 (a rebound from a 0.5% contraction in the Q1). On the trade front, Japan ran a current account deficit for the first time in 5 months in June as surging imports eclipsed exports despite the weaker yen, further highlighting the pressure from energy and raw material prices. The deficit reached ¥132.4 billion ($980 million) in June, reversing ¥872 billion from the same month a year earlier. To aid the current swathe of inflationary pressures, a government panel agreed to a hike in the average minimum wage across 2022, with current wage growth having been muted at best. The Bank of Japan (BoJ) believes that wage growth will aid the overarching 2% inflation target. Meanwhile, Japan’s prime minister condemned China’s firing of ballistic missiles during military drills around Taiwan. Five Chinese missiles appear to have fallen in Japan’s exclusive economic zone, with four of those believed to have flown over Taiwan’s main island.

China
Chinese indices closed lower across the week as US-China tensions continue to escalate, following US House Speaker Nancy Pelosi’s visit to Taiwan. The Shanghai Composite and CSI 300 closed lower by 0.81% and 0.32% respectively. China’s foreign minister has called House Speaker Pelosi’s visit to Taiwan “manic, irresponsible and irrational”. Following the visit, China launched its largest ever military exercises in the region, after China left stern warnings to the US insisting that Pelosi does not visit Taiwan. Pelosi’s decision has enraged China, who considers Taiwan to be a breakaway province. The Chinese government has threatened to eventually seize the island by force if other attempts at unification are unsuccessful. The US does not officially recognise Taiwan, but it does maintain a strong relationship with the island, which includes selling weapons for Taiwan to defend itself. On Friday, China said Friday it would halt cooperation with the US on areas including military relations and climate change while imposing sanctions against House Speaker Nancy Pelosi. Beijing also cancelled phone calls between regional military commanders, defence meetings, talks on maritime safety and on climate change. It also said it would end cooperation with the U.S. on anti-drug efforts. Shares of Chinese chipmakers’ rose in contrast with the indices, as investors bet that the government would increase support for the domestic semiconductor industry. On the economic front, the official manufacturing purchasing managers’ index (PMI) fell to 49.0 in July from 50.2 in June, below the 50-point mark separating contraction from growth, marking the lowest levels in three months.

India
Indian indices closed higher across the week despite the Reserve Bank of India (RBI) announcing a 50-basis point hike in repo rates. the Nifty 50 rose 1.39%, while the BSE Sensex closed flat. With price levels across the region remaining elevated the RBI announced a 50-basis point hike in the repo rates (the rate at which RBI lends to commercial banks) thereby taking the cumulative rate hike over the last three months to 140 basis points, reaching 5.40%. The RBI maintained its inflation projection at 6.7% in 2022-23, with real GDP growth projection at 7.2%. The RBI aims to achieve the medium-term target for consumer price index (CPI) inflation of 4% within a band of +/- 2%. The RBI noted a pause in inflationary pressures, with monsoons increasing food supplies and dropping food prices. In addition to this, increased oil supplies have also served to keep oil prices constant. Finance Minister Nirmala Sitharaman on Monday said the Reserve Bank of India (RBI) has taken steps to promote rupee as the preferred currency for global trade in order to promote exports. Last month, the RBI asked banks to put in place additional arrangements for export and import transactions in Indian rupees in view of increasing interest of the global trading community in the domestic currency.

MENA
Indices across the MENA region closed higher for a fourth consecutive despite a break in the oil prices rally. Saudi Arabia’s TASI, gained 1.99%%, while the UAE’s DFMGI closed 0.59% higher. Despite rising fuel costs and inflationary pressures, UAE consumer spending increased 22% in the first half of the year, signalling an economic rebound. Spending on retail items grew 16%, year-on-year, in the first six months of 2022 while spending on non-retail goods rose 31% in the same period. Operating surplus for Q1 rose to AED 36.4 billion ($9.9 billion), up from AED 15.9 billion posted in the same period in 2021. Public revenue in the first three months of the year rose by 39% on an annual basis to AED 123.8 billion. The UAE economy is poised to see its strongest annual expansion since 2011 after having grown by 8.2% in Q1 thanks to higher oil prices and measures to mitigate the impact of the Covid-19 pandemic. The UAE economy expanded by 3.8% in 2021 and is now expected to grow by 5.4% and 4.2% in 2022 and 2023.

Currencies
The US dollar index rose 0.68% against a basket of 6 major currencies (marking the second consecutive dip) reaching a value of $106.62. With this, the yen finished the week unchanged from the previous week at around JPY 133 against the U.S. dollar. The yuan also closed flat against the dollar. 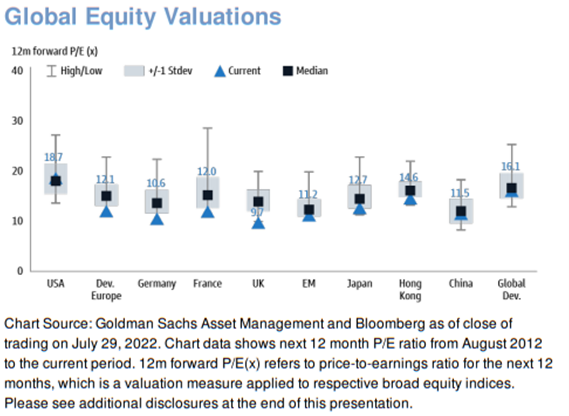 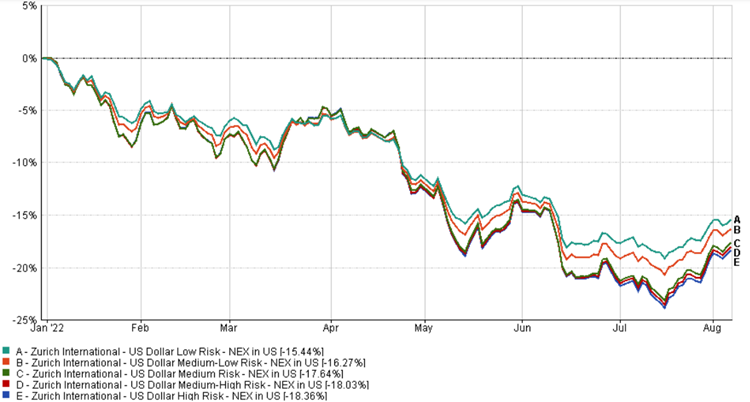 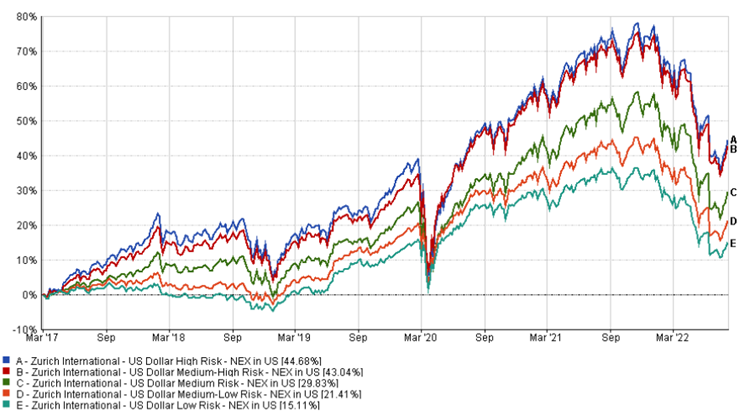 Disclaimer: This document is for information purposes only. This document does not constitute an offer, an invitation to offer, or a recommendation to enter into any transaction, nor does it constitute investment advice. Its contents are derived from sources generally believed to be reliable although no representation is made that it is accurate or complete and we accept no liability with regards to your reliance on the same. Past performance is not necessarily indicative of future results and prices and availability are subject to change without notice. Availability shall be subject to the relevant law and regulation and pursuant to the relevant Fund Prospectus and relating legal documents.  Where overseas investments are held, the rate of exchange may cause the value of investments to go down as well as up. The value of investments and any income from them can go down as well as up and you may not get back the amount originally invested. Chart Source: GSAM and Bloomberg as of close of trading on August 31, 2017. Chart data shows next 12 month P/E ratio from August 2007 to the current period. 12m forward P/E(x) refers to price-to-earnings ratio for the next 12 months, which is a valuation measure applied to respective broad equity indices. Please see additional disclosures at the end of this presentation. All data is denominated in USD unless noted otherwise.† Data is released weekly, as of Monday. If data displays an asterisk: